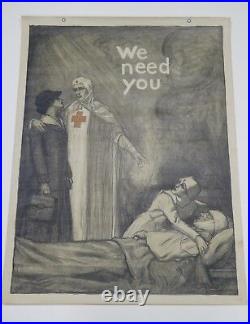 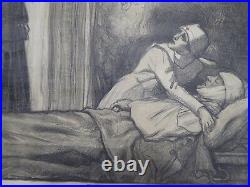 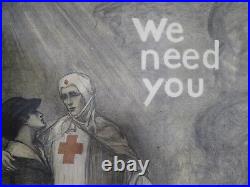 Red Cross Original Vintage Poster. Approximately 100 years old. Good condition for a print of its age. Cloth Backing with Grommets. Image size: 40 X 30. Though an American citizen born of American parents in London in 1863, Albert Edward Sterner studied drawing as a teenager at the Birmingham Art Institute in England. The dates are clouded, but he lived in Germany in Gaggenau and Freiburg from sometime in the late 1870s until he went to Chicago between 1879 and 1882. He worked with Walter Wilcox Burridge there, painting theater scenery, in addition to illustrating newspaper articles, and employment in the lithography business. Though Sterner moved to New York City in 1885, for the next twenty years he was mainly in Europe. In Paris in 1886, he studied at the Academie Julien with Jules Lefebvre and Gustave Boulanger. He received numerous commissions for magazine illustrations. A Red Cross nurse appealing to a young woman for help, as another nurse tends to a wounded man. From the Red Cross: The Red Cross nurse was considered a heroine, in fact and fiction. During World War I, the Red Cross enrolled 29,000 professional nurses, and 20,000 of these served with the military. In France alone, Red Cross personnel staffed twenty-four base hospitals that were operated jointly with the army. These hospitals treated nearly 92,000 wounded soldiers. The working conditions were often primitive, and the hours long and exhausting. The stamina and dedication of the Red Cross nurses became legendary, and inspired popular songs such as The Rose of No Man’s Land and novels like Ernest Hemingway’s A Farewell to Arms. Or also known as Chromo-lithography produced very rich coloration, which accounts for a considerable part of the appeal of these posters when we see them today. This item is in the category “Art\Art Prints”. The seller is “caulkart” and is located in this country: US. This item can be shipped worldwide.